You are here: Home » No Religious Test 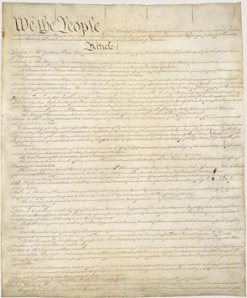 There is no statement in the U.S. Constitution declaring this country to be a “Christian” nation.

hold Federal or other public office, whether elected, appointed, or a civil servant.  In fact, in Article VI, Section 3, of the Constitution we find these words, “…no religious test shall ever be required as a qualification to any office or public trust under the United States…”

What made me think of this provision in our Constitution was a question asked of Republican candidates for president during a debate several years ago with questioners from the Internet seeking answers.  One questioner was seen holding a Bible while saying, “Everything we need to know about the candidates will be found in how they answer this question.”  Then he held up his Bible and asked, “Do you believe every word in this book to be true?”  He asked the question several times with more vigor each time.

It is my hope that people, who fill the office of President, or any high office in our country, are people of faith.  Faith gives substance to their being and helps them through the difficult trials that are certain to be a part of the terms of office.  However, it is also my hope that decisions made while in office solely protect the Constitution and defend our liberties as Citizens of a republic based in representative democracy.

A government bound by or led by religious zealots is very dangerous to personal liberty.  Such a government is a theocracy.  We have evidence of what a theocratic state looks like.  Currently, the religious elite of the country govern Iran.  In Afghanistan, before 2001, the religious elite called the Taliban, who were and are zealous Qur’anic, the Islamic Holy Book, students, ruled the country.  In fact, the title “Taliban” comes from a word meaning students.  In our own country, we have the history of the Salem witch trials, which were a result of a theocratic government of the Massachusetts Colony in the 17th century.  Under such rule, people are beaten and executed for minor infractions of the “holy law” laid down in Holy Scripture and defined by clerics.  Women, most mistreated in countries where religion’s rules are the law are women.  The persecution of women was a sad part of the Salem witch trials.

“Yes, but,” you might be asking, “what about Jesus and the kingdom of heaven?”  It does appear that Jesus was calling for the establishment of a religious state dedicated to the rule of God.  However, look more closely.  Jesus seems to be calling us into a relationship with God not into a political system.  In fact, he seems to have turned all the rule-making leaders of the time on their heads.  He wanted people to change—to repent—but he was not intent on establishing a theocracy.

Certainly, religious leaders and religious people in general should apply the high standards of fairness and justice to those elected, appointed, or hired to positions of public trust.  War, for example, is a moral issue as well as political issue.  The other social issues of our time, such as abortion and same-sex relationships, are moral issues requiring debate. However, do they rise to being issues of national concern solved in constitutional law?

I have long-held that it is the Church’s role to teach ethics and to encourage its people to live ethical and just lives.  In addition, I have always believed that the function of the Church, as the Body of Christ, is to seek the mind of God through Jesus Christ.  We must always look to Jesus for answers.  What did he say or do about public punishment, as in the case of the woman accused of adultery?  Jesus said, essentially, “Look to yourself, are you free of sin, of adultery, or any other infraction of the law?”  If you say, “Yes” you are deceiving yourself, as the apostle John wrote in his First Letter to the Church (1 John 1:8).

Prayer is the means by which we encounter God.  If a state apparatus dictates prayer, Can we have a meaningful encounter with God?  An encounter with God, it seems to me, is a personal adventure.  It is truly difficult to be on an adventure with God based in a prayer offered in a public arena by a functionary of the state and invoking God to substantiate the work of the state.

Thus, it does not matter what the candidates for the Presidency of the United States believe about the Bible.  There are too many ways to understand and to interpret the Bible for such a test to be valid.  What does matter is that they are visionaries of peace and justice modeled in the life of Jesus.  Further, it is important that they not crucify Jesus repeatedly by ignoring the needs of the poorest around the world who are our brothers and sisters in Christ.