You are here: Home » Wiped away Tears 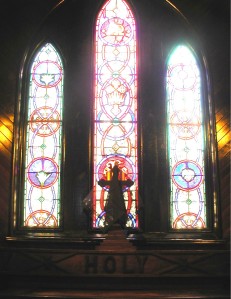 A call came in one morning at one o’clock. The caller announced that someone I knew had been killed in an automobile accident. The caller said, “I thought you would like to know.” Of course, I would want to know, but I didn’t like to know. Nevertheless, I had to know about this tragedy. Later, I was contacted again. This time by what is euphemistically called a Funeral Home. I know what a funeral is and I know what a home is, but I don’t get the connection between a funeral and home; unless it is a comment on the fact that in death we are “called home.” This and other similar euphemisms reflect an inability to face the reality of death. This inability is clearly demonstrated by the funeral home culture we live in.

Even in the tragic circumstance of the death of my friend I was faced with another attempt to soften or lessen the reality of death. The funeral home director (another euphemism) encouraged the family to have a visitation and an open casket. This is a sales ploy. There is expense with everything done in a funeral home. The use of the chapel, the embalming, and the makeup used to cover the fact the person is dead—expenses all. The friend who was killed in this terrible accident was mangled and misshapen by the terrible nature of the crash. Lying in the expensive casket he did not, I emphasize did not, look good; he did not look like he was asleep. An effort was made to make him look at sleep and at peace, but he looked very dead to me.

This is all part of the culture of the denial of death. A dead body is a dead body but the spirit or soul of the individual is what we miss the most. Of course, physical presence makes a difference, but if the physical presence means we live no longer in a quality that gives us meaning, presence is less important than spirit. When we recall a person who has died we chose, most often, to remember the vital things that person did rather than how the last minutes of life were spent. Thus, it is the soul that matters not the physical being.

The Scripture often selected for the Burial Office in the Book of Common Prayer come from the apocryphal Book of the Wisdom of Solomon. I have read them or heard them read so often I almost know them by memory. The cogent words or phrases: in the Wisdom of Solomon citation the “souls of the righteous are in the hand of God.”[1]

Two times in the Book of the Revelation of John[2] we read of a new place all tears are wiped away. The point of these two Scriptures is that the Saints are freed of the power of sin and the calamities of life. When does this and where does this freedom exit? Is only in the afterlife, in paradise, or is the promise of God available to the Saints who live today? If the promise of freedom is only for the dead, what is the point of living? The Saints, all who have committed themselves to be followers of Christ Jesus both living and dead, live and have lived in the hope of this freedom. It is a living hope not only a promise of some other time and place.

The Hebrew Bible’s influence on Christian text is seen in a selection from the Book of Isaiah.[3]

On this mountain the LORD of hosts will make for all peoples a feast of rich food, a feast of well-aged wines, of rich food filled with marrow, of well-aged wines strained clear.  And he will destroy on this mountain the shroud that is cast over all peoples, the sheet that is spread over all nations; he will swallow up death forever. Then the Lord GOD will wipe away the tears from all faces, and the disgrace of his people he will take away from all the earth, for the LORD has spoken. It will be said on that day, Lo, this is our God; we have waited for him, so that he might save us. This is the LORD for whom we have waited; let us be glad and rejoice in his salvation.

Isaiah declares the earth is covered in a shroud. A shroud is the cloth used to cover a dead person. However, the promise is that the love and glory of God will prevail and tears will be wiped away from our faces.

Thus, the Scriptural promise is that the souls of the righteous are in the hands of the living God and in his hands all tears will be wiped away. Further, in the creedal statement of the Church[4] we say we live and believe in the hope of the resurrection; that is, the renewal of all the faithful. For the living it is a hope of daily renewal and daily resurrection from those life events that seem to defeat us. For those saints who have gone before us it is a resurrection into a new life in Christ.

All Saints’ Day, November 1, is a major feast among Christians all over the world. However, that is a day remembering the saints both living and dead who do not have a day set aside for them to be remembered, such as St. Luke’s Day, St. Francis Day. The day to remember those who have died and are who are unknown to the world is All Soul’s Day, November 2. In Mexico and other Latin American countries the day is called Dia de los Muertos, the Day of the Dead.  In the millennia since all of this became a part of the Christian tradition there has been the perversion of Halloween, now a day set aside to pass out candy to children who don’t need it—candy rots their teeth and makes them hyper. It is just like Christmas and Easter; major feast among Christians that have been taken over by greed. But, we cannot change what is now embedded deep in the culture only endure it. Nevertheless, I wish we could share All Saints’ Day more adequately.

Let us return to and think about the Scripture. The promise of reconciliation, of salvation, cries out from these Scriptures to be heard. Isaiah writes, “God will cast away the shroud.” Hear the words clearly, “[God] will destroy on this mountain the shroud that is cast over all peoples, the sheet that is spread over all nations; he will swallow up death forever.” As brief aside let me explain that the mountain is Zion, the holy hill where Jacob encountered and wrestled with God. It is from the people of Israel that new life comes; it comes in the reconciling love that is embodied and personified in Jesus Christ.

The Scripture promise is for some to be a time in the future in a super-natural world, but it seems to me that the promise is now and present in this world. So, instead of denying the reality of death we need to emphasize the beauty of life. While the promise is a place of painless living in the presence of God—at the throne of Grace—it is essential that followers of Jesus work at this very moment to make real the promise stated by Isaiah when he wrote, “Then the Lord GOD will wipe away the tears from all faces, and the disgrace of his people he will take away from all the earth…”

When Jesus calls Lazarus from the tomb he doesn’t turn to Martha and say, “Look what I have done.” Instead, he says, “Unbind him and let him go.” That is what Jesus says to us when we are no longer fearful of death and live every day as life matters. We our unbound, we are let go. We are free. The freedom of Christian living is the freedom to be reconcilers, the freedom to love unconditionally, the freedom to live without hate or prejudice, and finally, the freedom allow others and us to be the person God intends each of us to be.

The new heaven and the new earth is not some distant hope, it is a present expectation of those who join and continue in the community of the saved, that is, those who are baptized of both water and the Spirit.

Then, the promise of the Feast of All Saints is that as we live—we cannot be defeated by death. We cannot let the culture that denies the reality of death prevent us from living.  We do not need to fear and to hide our fears in euphemisms and the embalmers’ make-up, but instead live knowing, as we read in the Wisdom of Solomon, “The souls of the righteous are in the hand of God…” This is as true today for the living (we live in the hand of God) as it is for us into eternity.

[4] The Apostles’ and Nicene Creeds.