You are here: Home » An Advent Story 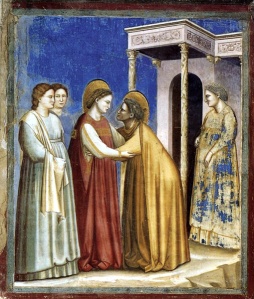 The Visitation by Giotto

A young woman, still in her teens, has a dream of an angel speaking to her. The angel she knows to be one of the great legends of Hebrew lore, the archangel Gabriel. In this vision she learns something that’s troubling and something she is uncertain she should repeat. Nevertheless, the fact is that she will have a child, a gift, and a very special gift from God.

Despite the angelic greeting, she is frightened. This young woman leaves her home village in the hills to visit a cousin who lives in another town some distance away. The encounter with the angel is a secret that is too much for her to keep to herself. She needs support; she needs someone to talk to. She cannot talk to anyone in her village about this—she would be accused of a terrible sin.

Coming down from the hills in the east, she crosses a wide and long valley rich in agriculture. The valley fields are already showing signs of a good harvest. All will be well fed this year.

Later, the heat of the day adds to her exhaustion. She feels insecure. She is fearful of the future. But the cool of the night, however, relieves the pain in her head and helps her quiet her mind. She can sleep and be rested before she greets her cousin the next day.

“What will I tell her?” she asks herself. “How can I explain all this?” she continues.

There is no explanation; she plans to tell her cousin what happened—that is and all she can do. In being forthright, maybe, she will get some help from her beloved kinswoman.

The young woman arrives at her cousin’s home and to her surprise she finds that her cousin is expecting a child.

The greeting from her cousin is a rush of exciting happy words; her joy cannot be restrained.  She is so joyful; in fact, the child in her womb seems also to move with joy. She calls out to her unexpected visitor from the hills, “Blessed is the fruit of your womb.” The cousin knows without being told what our young woman’s secret is.

Between them the joy of expectation is boundless. They both know of the very special nature of the children conceived in them. The cousin and her husband were beyond childbearing age. The young woman who is also carrying a child is almost too young an age.

There are further complications.

She is to be married; the young woman has to tell her husband-to-be what has happened to her. It is going to be difficult, he may not believe her, and further, he may not (no, he will not) want her for a wife.

But all of that can be put aside for now. For the days and weeks ahead she can enjoy the company of her beloved cousin. In fact, she can use this time to learn about childbirth, and what happens as the child forms in the womb. She will be there to help her cousin when she gives birth.

Both are thankful that the weather is so mild. They can spend more time in the out of doors; they walk the hills together and ponder what it is that has happened to them.

The two of them learn to pray together and to talk freely with one another. In their walking and in their conversation they find support from each other, they laugh together, they sing together and they learn what sisterly love truly is.

This is a time only women can understand. Even in my meager effort to try to capture their emotions, I fall short. Yet, I can sense that this story is more than a tale of two women (one very young and one quite mature) sharing an event that was and continues to be truly unique.

Their story is the Advent story. It is a story of expectation, love, hope, and finally peace.

After her cousin’s child is delivered, our young woman begins the trip back to her home village. Again she travels across the valley and the hills of her native village. She notes that the crops are harvested; the weather is beginning to change. More rain now. She is returning home to the unknown.

Regardless of the possibility that her community and family may ostracize her, the young woman now fearlessly faces her future, trusting in God and the words of the angelic vision. To her joy and surprise the young woman was not only accepted and loved by her kinswoman, she is loved, cared for, and blessed by the man who will be her husband.

He sees more blessing in being her mate than in worrying about his status in the village or the embarrassment his bride may cause. Her husband-to-be, by being open to the direction of God’s Holy Spirit, brings finds honor in his obedience to God’s calling and ultimately he is the model of married and fatherly love. She is also a model. She is the model of hope, faith, and love.  In faith she accepts her role in the mysterious plan of God

Now she is home in her village, but now she is clearly pregnant. If there has been gossip, she has not heard it.  If the men of the synagogue have lectured her husband, he has not spoken of it.

All that has happened in the past several months, however, have only been prelude. She and her new husband have received word from a tyrannical government that all men must return to the cities of their tribal origin. So now, she faces another journey. This next journey is more demanding and will require all the strength that her faith can provide. Birth is near and walking is difficult.  Even riding on their beast of burden—a humble donkey—is difficult. They persevere; the couple makes it to the husband’s tribal home, and just in time.

What happens next was more than they had expected.  In fact, it is more than we expected.