You are here: Home » Hail Mary… 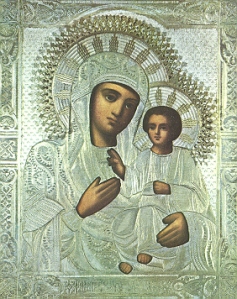 At one time I had started the process of becoming a Franciscan by joining the Third Order of St. Francis. The Third Order is a lay and clergy order of Franciscans who do not take vows of poverty and chastity. But adhere to a “rule of life” that includes prayer, worship, study, and peace. The Order is also made up of both men and women. Two years in a row I went on retreat with Third Order members in the American Southwest. The retreats were held at a convent about ten miles south of Albuquerque on the east rim of the west mesa of the Rio Grande Valley.

Each day of the retreat started with the ringing of the Angelus, a peal of bells, followed by breakfast, and then mandatory silence all morning. The silence was briefly interrupted every hour with a meditation on the Scripture of the day. The people on retreat would wander the grounds of the convent in meditation and prayer; or we could find a comfortable place where to read. I had a great time at these retreats; I even enjoyed the silence, which is rare for me. I like to talk, as you may surmise, and I like to listen to music, books on tape or C-D, or the radio. However, none of that while participating in the silence of the mornings. It was actually a refreshing experience.

Well, all that leads into why I love to listen to the words of Gabriel to Mary in Gospel Lesson today (Luke 1: 26-38). We began each hour of the silent part of the retreat by reciting, “Hail Mary, full of grace, The Lord is with thee; blessed are you among women.” Then the leader would read a selection of Scripture and then a meditation for us to ponder.

In the New Revised Standard Version (NRSV) of the Bible the text is, “Greetings, favored one! The Lord is with you.” In the Greek language in which the Gospel of Luke was written, the word that is translated into English as “greetings” is in ancient Greek actually, “rejoice”. For example, in the Greek and other Orthodox traditions Gabriel’s greeting is translated, “Mother of God and Virgin, rejoice, Mary full of grace, the Lord is with thee. Blessed art thou amongst women….”

The Protestant gene in our Anglican tradition has tended to place Mary in a secondary role. We allow her to emerge from the darkness of our indifference by bringing her out at Christmas time. If we didn’t, we couldn’t talk about the birth of Jesus. Even God knows it takes a female to give birth to other members of the species throughout nature. However, I think Mary deserves more than an annual display on our lawns during Advent and Christmas.

Let’s think about her for a few minutes.

She was likely only fourteen years old. To us that seems brutally young age to give birth. In our society we want to protect girls from dealing too early with the demands of child-birth and child care. However, in those days the average life span was about 40-45 years. At age fourteen Mary was already approaching her middle years. Joseph was likely much older; in fact, he may have already been married and was widowed with children. Of course, all of this is speculation. The only evidence we have is the common practices in Israel and throughout the ancient world. Common practices were to give daughters in marriage at a young age and for widowers to remarry soon after the death of a spouse. Having children was very important. They eventually provided the labor pool needed in family farming or crafts, such as carpentering. Young, healthy girls assured conception and having boys assured the lineage of the family. That’s why Joseph is identified as being from the “House of David”. It is likely that Mary shared that same lineage.

The cult of the Virgin Mary is a hallmark of several Christian expressions of faith. I use the word “cult” in a non-pejorative way. What I mean is that in many Christian communities Mary is elevated to a very high and special status. Many in the Roman Church want to elevate her to the role of co-redemptress; that is, she is on the same level with Jesus thus making the Trinity into a Quadrinity (if such a word exists).

In the Orthodox tradition Mary is, in Greek, Theotokos, which literally means, “God bearer”, and is translated as “Mother of God.” For some, the idea of calling Mary the Mother of God is too far in Mariology.  Mother of Jesus, yes, but Mother of God; isn’t that going too far?

Let’s examine that question. If we believe that Jesus is God incarnate (that is, God in human flesh), isn’t Mary, in fact, the Mother of God? How can we separate Mary from this very holy and lofty condition?

The basic difference between Anglicans and the rest of the Ancient Church is that we do not make any statement about miraculous event involving the Virgin Mary (other than the virgin birth of Jesus). We simply hold her up a model of submission to the will of God. She is reported by Luke as telling the Angel Gabriel that she will do whatever God’s calls on her to do. This is for us, the lesson of Mary and the Annunciation Story.

Let me suggest, however, that Mary deserves more attention. I believe that reciting the full text of the Hail Mary anthem does no harm and the opening statements of that anthem are certainly above theological debate. All we are doing by excluding Mary from our prayers is saying to ourselves, “We are not Roman Catholics”.  As far as I can tell that’s not much of a reason. Actually, the only difference between us the Rome is the pope. Yes, there are some other doctrinal differences, but the basic importance of Mary in our faith is not one of them.

If you use a rosary as a means of meditation and prayer, you have my permission, if it is needed (and I suspect not) to use the full version of the Hail Mary prayer. However, the part that bumps up against or Protestant gene is the second half of the prayer where the petitioner says, “Pray for us sinners now and the hour of our death.” Asking Mary to pray for us, for some, goes against the doctrine of direct access to God through petition and intercession.

Most Episcopalians and Anglicans generally do not ask saints to intercede on their behalf. However, if I ask you to pray for me during a crisis in life or at just any time, is there anything wrong with that? We need all the help we can get, and asking someone, including Mary (who is alive in the Lord), is an act of humble access to the benefits of prayer.

Use this beautiful prayer or anthem as you want and need. God hears all prayers, no matter their form or source.

So, “Hail Mary, full of grace, the Lord is with thee; blessed art thou among women, and blessed is the fruit of thy womb, Jesus. Holy Mary, Mother of God, pray for us sinners, now and at the hour of our death.

William Frank Bellais, the author of The Owl Press Blog, is a writer and an artist who is a retired Episcopal Priest and a retired Army intelligence officer. Bellais writes fiction, essays, and poetry. He paints watercolors, oils, and acrylics. View all posts by theowlpress →
Join 550 other followers
Follow The Green Hills Philosopher on WordPress.com