You are here: Home » There for the Grace of God

“There for the grace of God go I.” That’s a remark I have made after some catastrophic event has hit the 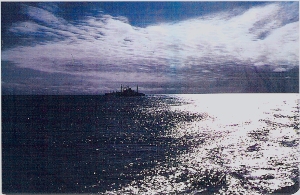 news. Remember the big Pacific Earthquake right after Christmas in 2004? Hundreds of thousands of people lost their lives in the ensuing tsunami. Or the earthquake in Japan last year that led to the collapse of a nuclear power plant and tsunami—again thousands of people died and other thousands were affected by the radiation that escaped from the plant. Airplane crashes, multiple pile ups on the highways, mass shootings—all tragic and again, “There for the grace of God go I.” The grace is that somehow I avoided that catastrophe and the sudden death all those other people suffered.

of God.”In the Gospel according to Luke there is a story of Jesus being told of a terrible massacre of Galileans.[1] Those telling the story are not only scandalized by the mass murder of pilgrims who are in the temple in Jerusalem making a sacrifice but worse, their blood has been mingled in with the sacrificial blood on the temple altar. The reporter seems to ask, “Did those people deserve that terrible end?” Jesus responds by asking about another tragedy—this time the people in Jerusalem who had the misfortune of standing next to the Tower of Siloam when it collapsed. What about those men? Were they so evil that God was justified in making the tower collapse, killing them under the rubble? What about all those people who died in the events I described? Did all those people deserve their terrible ends? These disasters are classified, especially by insurance companies, as “acts of God.”

The message of Jesus to the people of the time is they must be aware of coming calamity that has nothing to do with God. In the Book of Lamentations, a book of which Jesus is certainly conversant, Jeremiah writes, “…for he [God] does not willingly afflict or grieve anyone.”[2] Jesus tells his followers, at this time there are apparently thousands following Jesus around Galilee and down the Jordan Valley, that life is a random experience. They do not know when they will die and worst of all they may face the same sudden and unexpected deaths those they have asked about experienced. The response seems to have hopelessness in it. However, Jesus does leave the questioners, the reporters of terrible events hopeless.

Repent is one of those words that lead to misunderstanding. Jesus has already said the people in the incidents reported did not die because they were especially sinful and had failed to repent of their sins. They were merely victims of Roman rampage and unforeseen accident. Repentance would not have saved them.

Let us think about that word repent. In English the prefix RE stands for again—like review means to see again. In very basic terms, repent means to re-think. Jesus tells his followers to re-think their lives. Think about how they are living life.

Then he goes on to tell a parable seemingly unconnected to the conversation. There is an unproductive fig tree in a farmer’s vineyard. The famer wants to cut it down. The vineyard keeper suggests they give it one more year.

One more year—what for? The farmer has more than planted the tree. The tree has been looked after, fed special nutrients, and maybe even prayed over. Nevertheless, the tree does not bear figs. In my grandparents back yard in Virginia there was a fig tree. Every summer it sprouted and fruit grew abundantly. It was a great source of food for us in the days before World War Two. We loved that fig tree. I can understand the farmer’s despair. I think my grandfather would have chopped his fig tree down had it not been so fruitful. In the farmer’s field it was using up essential soil, taking too much energy to care for, and probably added to his loss of profit. However, the vineyard keeper wants to give it one more opportunity to produce—in other words, “repent.”

Thus if God does not “willingly afflict or grieve the hearts of men”[3] as the Scripture teaches, and Jesus reminds his followers that the people who died such sudden and tragic deaths were not punished for their sins, what then is the teaching? What is the Gospel message?

Jesus tells all those people around him to pay attention to life. In other words, he is telling to think again about the nature of their lives—that is, “repent.”

Ultimately, Jesus tells his followers, the God Jesus talks of is a God who is not wrathful, as supposed, but is the source of life’s second chances. Thus, if God can find a way to give life a second chance, then it is incumbent upon humanity to give itself a second chance—to give each other a second chance. This is the meaning of forgiveness for both others and for self.

[3] Prayer 55. For a Person in Trouble or Bereavement. Prayers and Thanksgivings, The Book of Common Prayer, 1979.

2 Comments on “There for the Grace of God”