You are here: Home » Texting While Eating

At first, I thought the two men were deep in prayer.

While traveling between cities in northern Missouri, I

stopped in a hamburger stand—a Wendy’s or MacDonald’s take your pick—and after completing my order and being served, I sat in a location where I could observe the gathering lunch crowd.

As I pushed the hamburger into my mouth and allowed the pickle and tomato drop to the paper box on the table, I grumbled about having to eat in such a place. But, there were few options.

I looked up as I wiped my mouth and noticed two men sitting at a table just across from me. They seemed to be in prayer. It is probably a very good idea to seek God’s blessing on restaurant food—especially in a hamburger stand.

In this part of the world it is not uncommon to see elderly couples offering grace before eating in a restaurant. It is, however, not a common sight to see two me in ragged work clothes, wearing their KC Royals caps on backwards, offering grace or any other kind of prayer in a hamburger stand. If it were a common practice of such men to behave this way, I likely would not have noticed them.

Looking closer, however, the men were not in prayer. They were concentrating on their Smart Phones and apparently sending or receiving text messages to or from someone. Neither was looking at the other. They may have been writing text messages to each other.

One may have written, “What did you get?” 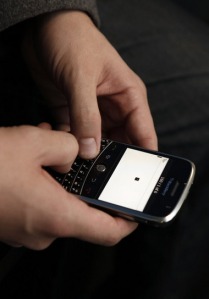 The other replied, “Same as usual. Did you get a large or bigger coke?”

“Don’t you always get a Coke?”

Well maybe they weren’t sending text messages to each other. Might have been reading the news, or looking up something on Google. While doing all that, their hamburgers and fries were getting cold and the ice in their drinks was melting.

Disappointment over the fact they were not offering grace swept over me briefly, remembering I had not said grace over the hamburger that was falling apart and the fries that were losing their flavor as they went cold. The first few bites of these hamburgers seems tasty at first. Also, there are few pleasures as good as eating a hot and salty French fry. Nevertheless, when you get down to the last bites of these delicacies, there is no flavor, no joy, and no food value left in them—assuming there was any food value to start with.

Then, thinking about the two men, I looked about the hamburger stand to see what else was going on. You never know, somebody I know may have come in. No one I knew did, but I did notice that every other person was on a cell phone either talking loudly into the device—it must be hardtop hear on the other end of some of these portable telephones. Or, they were in deep concentration sending text messages.

Of course there are plenty of older people complaining that, sadly, life seems to be passing us by. Nonetheless, it is true. Being born at the height of the depression era and not being fully aware of the cultural changes taking place around me. This event is proof that I am not always conscious of the fact that these instruments of communication have become like mechanical appendages attached to bodies. It’s like observing evolutionary change right before your eyes.

I own a cell phone and sometimes I send a text message, and occasionally I get one. Sometimes I have called people on my Smart Phone, but I rarely get a call coming in to me. Mainly, I keep the cell phone with me in the car for emergencies. When I am driving, I never answer the phone when it rings, and I certainly have no intention of writing a text message when I am driving. Going down an interstate at 70 miles per hour is distraction enough.