You are here: Home » Dearly Beloved

MARRIAGE IS MARRIAGE IN THE SIGHT OF THE LAW. I am pleased this issue has been settled and people, regardless who they love can be married. Nevertheless, I cannot in good conscience, as an Episcopal priest, be an officiant at a same-sex marriage.

It is not a matter of bigotry. In fact, I wish all people good will and the right to marry whomever they love. It is a matter of doctrine with me.

The doctrines of the Episcopal Church and Anglicanism in general, are spelled out in the Books of Common Prayer of the various Anglican provinces around world. The Episcopal Church in the United States of American, a member of the Anglican Communion, uses The Book of Common Prayer, 1979. The book provides direction and statements on Holy Matrimony. Note the difference: marriage and Holy Matrimony. Marriage can be done by any official the state recognizes has having authority to hear the vows of a couple and pronounce them married. Holy Matrimony is more than marriage; it is the blessing of the couple in the name of God and the Church. 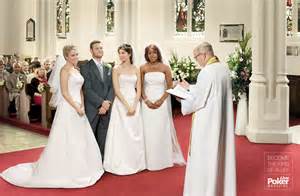 In the Book of Common Prayer is this statement:

Christian marriage is a solemn and public covenant between a man and a woman in the presence of God.  In the Episcopal Church it is required that one, at least, of the parties must be a baptized Christian; that the ceremony be attested by at least two witnesses; and that the marriage conform to the laws of the State and the canons of this Church. (p. 422)

The priest or bishop officiating at the ceremony begins with these words:

Dearly beloved: We have come together in the presence of God to witness and bless the joining together of this man and this woman in Holy Matrimony.  The bond and covenant of marriage was established by God in creation, and our Lord Jesus Christ adorned this manner of life by his presence and first miracle at a wedding in Cana of Galilee.  It signifies to us the mystery of the union between Christ and his Church, and Holy Scripture commends it to be honored among all people. (p. 423)

Once again, the doctrine is clearly stated; Holy Matrimony is a bond and covenant established by God in order to bring together is Christian marriage a man and a woman.

The Prayer Book continues to reinforce this doctrine with these words:

The union of husband and wife in heart, body, and mind is intended by God for their mutual joy; for the help and comfort given one another in prosperity and adversity; and, when it is God’s will, for the procreation of children and their nurture in the knowledge and love of the Lord.  Therefore marriage is not to be entered into unadvisedly or lightly, but reverently, deliberately, and in accordance with the purposes for which it was instituted by God.(p. 423)

Finally, the Outline of Faith in the Book of Common Prayer continues to provide guidance on Holy Matrimony.

What is Holy Matrimony?

Holy Matrimony is Christian marriage, in which the woman and man enter into a life-long union, make their vows before God and the Church, and receive the grace and blessing of God to help them fulfill their vows. (p. 861)

Providing permission through the canons of the church is not satisfactory.  Canons are legal directions on the governance of the Church not doctrinal statements. Instead of a canonical ceremony for same-sex marriages and the Book of Common Prayer’s “Celebration and Blessing of a Marriage” for heterosexual couples, the Episcopal Church must device a doctrine of marriage and revise the “Celebration and Blessing of a Marriage” in the Prayer Book. Further, the Book of Common Prayer must be amended so that all statements about the nature of marriage are consistent with whatever the Holy Spirit directs in amending the Prayer Book.

The Book of Common Prayer is the essential issue with me. The book identifies the Episcopal Church and Anglicanism as a

body of Christians devoted prayer and worship. The book provides through it rubrics (directions for worship) guidance for both clergy and lay people the nature of the Christian life as expressed in Anglicanism. Setting it aside to adjust to changes in culture and law is a betrayal of the faith of many Episcopalians. Of course, there are some who wish to get rid of the prayer book. It is cumbersome for visitors, hard to follow at times, and is not “hip” with people who want to sing praise songs, have a drum set, and bass guitar for worship. However, it remains the standard of faith, the standard of good language, the standard for meaningful worship.

I would be happy to stand as a witness to any marriage in any place except in the Episcopal Church until the Book of Common Prayer is amended.