You are here: Home » Christ’s Own for Ever

The wind from the east blows up against the sandstone escarpment causing dust devils to swirl over the ruins. The stone wall ruins are all that remains of a once bustling community. Once lush with date palm trees the community housed people who accumulated the ancient sacred writings while waiting for the coming Messiah.

Now dry, tourist step into the stone-lined cisterns and try to imagine what it was like two-thousand years ago for the people who lived and worked in this remote settlement. The pits, built for catching rare rainwater and maintaining life in the stark desert are empty are now an archeological curiosity in the Judean wilderness near the Dead Sea. More importantly perhaps, the cisterns were used by the long-ago inhabitants to purify the bodies of prayerful people aware of their sinfulness. As with others sharing the Hebrew tradition, these people, the Essenes of the Eastern Wilderness of Judea, believed that to stand in prayer and to worship Yahweh meant they must be washed clean by the scarce and holy water of the Qumran cisterns.

…washing away sin by bathing in water provided a means to stand before God in a state of spiritual as well as physical cleanliness.

In the Jewish tradition, ritual purification is found in the Torah, the first five books of the Bible, specifically, in the Book of Numbers.[1] The Hebrew tradition of cleansing in sacred water can also be found in other antique stories of Bible. For example, in the fifth chapter of the Book of Second Kings, the Syrian general Naaman is directed by the prophet Elisha to wash  seven times in the Jordan River to cure a form of leprosy. Therefore, washing away sin by bathing in water provided a means to stand before God in a state of spiritual as well as physical cleanliness. Thus, when John-the-Baptist called for repentance on the banks of the Jordan, washing sins away by water before the Messiah appeared did not

seem unusual to the sons of Abraham. In John’s view of the world, no one was without sin. Everyone, especially those who believed in the God of Abraham, Isaac, and Jacob failed to meet God’s high standards—both inwardly and outwardly. In fact, they could not claim they had any special status resulting from their heritage as sons of Abraham. [2]

Jesus shows up seeking to be cleansed in that same ancient tradition. Possibly, in seeking this ritual cleansing he prepared himself to be the vessel of God’s Spirit.  Maybe, Jesus wanted to declare his bond with humanity before he was declared to be God’s son. We do not know Jesus’ motive. of Jesus, “I am not worthy to untie the thong of his sandals.”[3] Then he stated quite emphatically, “Jesus is the man!” That is, Jesus is the one you have all been waiting for and seeking.[4]

Baptism ties the believer to Jesus symbolically and spiritually.

The Church has established that the baptism of Jesus teaches that believers should also experience this ritual washing. Baptism ties the believer to Jesus symbolically and spiritually. Jesus and the believer have stepped forward acknowledging their humanness, w in the presence of God. Thus, we have the Sacrament of Baptism and the only requirement for admission into the Body of Christ—the Church.

Baptism is a strange word. It does not appear in the Hebrew Bible (the Old Testament). In the Hebrew context, as mentioned earlier, immersion is a purification ritual called mikvah. In the Christian context, the word baptism is derived from a Greek word, baptismos, meaning to be washed.[5]

We see, for example, problems concerning baptism in the Acts of the Apostles.[6] Someone other than the apostles was baptizing people in the name of Jesus. or gifts of the Holy Spirit.[7] Thus, it was essential that the Apostles go to the newly baptized and add more than the ritual of water purification solely in the Name of Jesus. The Apostles deemed the invocation of the Holy Spirit at baptism had to be included in bringing converts to the new cause. 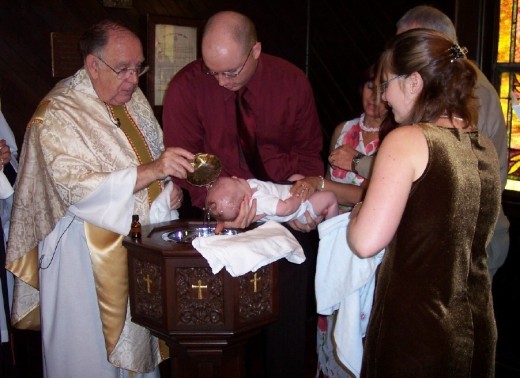 From this Scriptural story, two ideas have arisen. The first is a traditional view that at baptism the candidate is anointed with chrismal oil, invoking God’s Holy Spirit and sealed by the sign of the Cross as Christ’s own forever. The second and controversial notion is that to be truly Christian one must be “baptized in the Holy Spirit.” A convert baptized with the laying on of hands reportedly experienced all the gifts of the Spirit[8] later identified by the Apostle Paul as including speaking in strange tongues, interpreting tongues, and prophecy. Further, those who believe in a theology of baptism of the Holy Spirit insist true followers of Jesus engage only in ecstatic worship.

Because there seems to be confusion concerning the nature of baptism, let me review with you what Episcopalians say about baptism.

The Catechism[9] identifies baptism as the first of the two sacraments ordained by Christ, the other be the Holy Eucharist. Called Holy baptism is the only requirement for Church membership. The Catechism instructs that baptism is the sacrament by which God adopts believers as his children and makes them members of Christ’s Body and inheritors of the kingdom of God. The Catechism further instructs that baptism is by water, the Sacraments outward and visible sign, by which sin is symbolically washed away. The inward and spiritual grace of baptism is union with Christ in his death and resurrection, birth into God’s family the Church, forgiveness of sins, and new life in the Holy Spirit.[10] In baptism, the believer renounces evil, seeks to enjoy the benefits of God’s Grace by believing Jesus is the Savior and promises to uphold the dignity of all human beings.

Those baptized as infants have known from the beginning days of their lives that they are integral to the Body of Christ—the Church. Therefore, regardless of the age of the person being baptized—whether infant, child, or adult—or the form of baptism, as long it is with water and in the Name of the Holy Trinity of God, the benefits of the grace of baptism adhere and the grace provided in baptism is life-long.[11] Additionally, those baptized in infancy or childhood should think about their baptisms as a gift and be grateful that someone loved them so much they wanted them to live in the grace of God. Further, it does not matter whether if by immersion, someone poured water over the candidate, or even if the candidate experienced the ecstatic joy the baptism is valid. What matters is that someone loved baby, the child, enough to take it to the font, the pool of water, or to the river bank, and these words were said, “I baptize you in the name of the Father, the Son, and Holy Spirit.” There should be joy in knowing that the new baptized has been sealed with the sign of the cross and made “Christ’s own forever.”

Certainly, there are those who scoff at the idea of baptism, of ritual purification, thinking there is nothing beyond this present life on this planet. That may be so. However, faithful people live in the hope of their baptismal creed. Hope is an active concept of life. It is a hope there is something greater than self and the immediate. The baptized Christian lives in the sure hope will share in must be treated with all dignity Without hope and unconditional love, there is no spiritual life in the present.

The Gospels tell of Jesus’ willingness to step into the Jordan River and allow John the Baptist to cleanse him of sins he has not and will not commit. If Jesus humbled himself before John, those who wish to follow Jesus on the journey of life can do no less and in humility offer the same grace to all.

[1] Numbers, Chapter 19 provides for ritual purification in water for converts, for people exposed to corpses, and other defilements.

[5] The early Christians are believed to have practice the rite of baptism by having the candidate stand naked in a pool of water and then washed by pouring water over the convert.

[10] There are two elements of a sacrament: (1) an outward and visible sign. (2) An inward and spiritual grace.

[11] Article XVI, Sin after Baptism, The Articles of Religion, The Book of Common  Prayer, page 870.