You are here: Home » New Beginnings 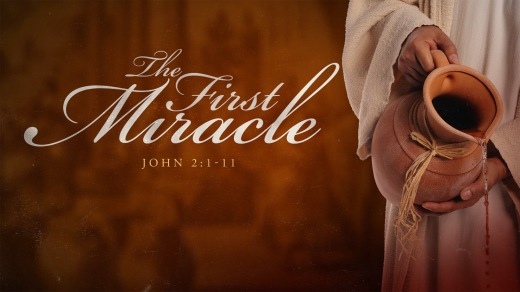 As a parish rector, I always looked forward to weddings in the church. The rite in the Book of Common Prayer is titled “The Celebration and Blessing of a Marriage.”

The Celebration begins by the officiant, usually a priest, reminding the assembled congregation and witnesses to the marriage that by his presence Jesus adorned a wedding feast in Cana of Galilee. There he did his first miracle and it was an unmistakable sign of his Messiahship. While it is the important first step in revealing his calling, this is a rather humorous story.  The party had run out of wine and Jesus’ mother was the first to notice. As many mothers do, she worried over details and she worried that the party was about to come to an end far too early.  For some reason not explained in the Gospel text this was a detail needing her son’s attention.

Because the steward and the disciples were in full control of their faculties, when the water became wine, they noticed it.

A wedding feast, as  I understand the wedding customs of that part of the world, continued for a few days and much food and drink is consumed. Therefore, it is not too much to assume that the wedding guests were full of food and drink by the time this event took place. In other words, most of the guests were very likely inebriated. 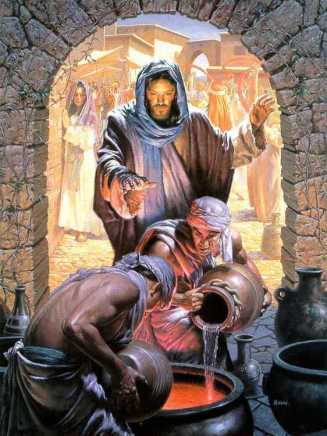 However, I don’t think the steward of the party was imbibing. The steward, which is something like a caterer, needed to stay sober to maintain control and provide a happy party for the guests. It is my presumption, also, that Jesus was careful in his consumption—we can probably add that presumption to his disciples. Because the steward and the disciples were in full control of their faculties, when the water became wine, they noticed it. Further, if the steward didn’t know, the disciples now knew who it was they had decided to follow. This was no mere haranguer and rabble rouser. They knew that Jesus was the Messiah, the one who was to come.

Further, in this story, we learn of a continuing connection between Jesus and his mother Mary. This mother-son connection that went well into adulthood is an important part of the story of Jesus’ ministry. She will stay with him all the way to the cross. Because she is so central to Jesus, we need to make her central to our thoughts and lives. While I am not advocating a “cult of Mary” as is evident in the Roman Church, I am suggesting that she is important to all Christians and should not be set aside when the nativity crèches are put away until next Christmas.

The story of the wedding feast at Cana of Galilee is a story of a beginning, a new chapter in the history of the world and in the history of faith. All weddings are a beginning.  The couple will be now known as a couple. The vows exchanged to honor and cherish one another for the rest of their lives are profound and strongly connect the couple to all who have also exchanged those same vows. The two become one. For example, when we speak of them, their names they will be said as if they were one word. Still, each retains his or her individual identity.

That leads me to advocate against made-up vows by the couple. I believe, when the words of the Prayer Book are used, the couple connects with the “communion of saints” that has come before us and will come after us. In other words, the words of the marriage ceremony (the declaration of consent, the exchange of vows, the blessing and giving of rings, the blessing of the Church) are the connecting tissue that relates all of us to each other as children of God and sisters and brothers of Christ Jesus. Marriage is the beginning of a new chapter in the couple’s lives. It is a beginning of a new chapter in ours as well.

…we are each connected to each other and the way that connection takes place is in words.

The Anglican priest and poet John Donne wrote in the sixteenth century, “No man is an island”, in which he clearly stated we are each connected to each other and the way that connection takes place is in words.  In fact, we, that is people who follow Jesus, are connected by the Word of God—Jesus.  John identifies Jesus as the Word (that is, Word with a capital “W”) in the first chapter of the Gospel.  He wrote, “And the Word became flesh and lived among us…” (John 1:14a).  Thus, I believe that words matter; especially when the Word is the physical manifestation of God on the earth.

Jesus brought to us a message of love and care. He understood God’s purposes differently than the prevailing social order. Women in marriage were often chattel, tools to be used to join important families together, to enrich a family, or to add another hand to the labors of the day. Jesus, however, changes everything. He insists that any effort in a marriage to subjugate one partner over another is not in God’s plan of love of reconciliation for the created order. His primary concern, if we read the Gospels closely, is that women in a marriage are full and equal partners. 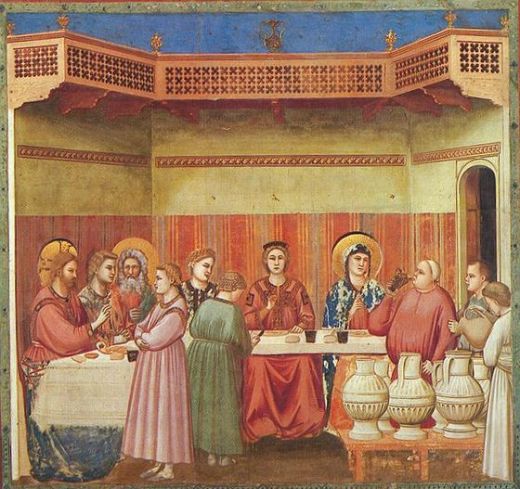 Marriage at Cana by Giotti

At the wedding feast in Cana of Galilee Jesus did not officiate at the wedding. I am not certain what the marriage customs among Jews were in those days; for example, I don’t know who officiated, how long the party lasted, what happened to the bride and groom as the revelers carried on. All we do know about this event is that Jesus was there. He was there to congratulate the groom and to bless the bride.  He was there among and with his friends and as the Prayer Book describes it, he adorned the wedding by his presence.

All brides are beautiful, all grooms are handsome.

My prayer is that Jesus will adorn all weddings by his presence. If we can get over all the preparation that goes into a wedding ceremony, and if we can be still and quiet for just a few seconds as the bride and groom take each other’s right hand in theirs, we will notice that Jesus has in fact adorned our weddings.

Finally, a wedding, any wedding, is a joyous occasion. All brides are beautiful, all grooms are handsome. So, it is appropriate for us after the ceremonies are ended to celebrate and to be joyful in the knowledge that something new has begun and life continues.