You are here: Home » SACRIFICE

Strange how often the Scriptures of the Holy Bible seem to fit the current political situation.

Abraham about to sacrifice his son Isaac. Today, we sacrifice our sons and daughters on the altar of nationalism and patriotic hubris.

I wonder if you have noticed any parallels. For example, In the book of Isaiah, in the Hebrew Bible, God condemns the people of Israel for their meaningless sacrifices and pointless festivals. Possibly, this is a stretched point of view, but this past week much of the political air was sucked up by what constitutes a sacrifice. A Muslim couple is on every news or so-called television news program talking about their son’s heroic death in Iraq fourteen years ago. For them, this was and continues to be a tragic sacrifice. A sacrifice of lost love, of a lost future, lost extension of the family they had so carefully nurtured. I know I did, and I suspect many in this country, felt their loss or at the very least felt their sorrow.

One of the candidates for President fielded the question, (paraphrasing) “What sacrifices have you made compared to the sacrifice of a Muslim mother and father who lost a  son in Iraq.? The sacrifice of “success” was the answer. “Success!” I was overwhelmed or underwhelmed—I am not certain what my emotions were when I heard the answer. Success is a gift. Sometimes it is a gift of birth and privilege. Other times it is the gift of innate talent. Mostly it is the gift of tenacity but rarely is a success an equivalent to the sacrifice of dying for one’s country or a noble cause.

I was a soldier (marine and soldier) for over twenty years. Early in my military career, I was awarded, along with every member of my boot camp platoon, the National Defense Service Medal. We had no idea what the medal was for, so we decided it was for marching our nightly fire watches around our boot platoon Quonset huts. So we called it “The Fire Watch

Medal.” I now have two such medals—then awarded a second one during the war years in Vietnam. The point is that last week I watched someone give the candidate a Purple Heart Medal—for what purpose I could not fathom—and I was shocked. I wouldn’t give either candidate my “Fire Watch Medal.” While it does not come close to the sacrifices required to earn the Purple Heart, the National Defense Service Medal does reflect a sacrifice of time and a willingness to face the perils of war—all my campaign medals and decorations reflect effort and sacrifice to some degree.

What makes a good soldier and a soldier’s family? Bravery, of course, is a good start, but bravery is not the first requirement of a good soldier. Here’s what I think makes a

person a good soldier—a soldier for any worthy cause:

To meet those demands of soldiering, sacrifice is required.

Soldiering is only a metaphor for life itself. What sacrifices are all making in our lives as we face the hard demands of living in this century? Most of us are required to make few sacrifices other than to be successful. The church is guilty of the sacrifice of success. If it’s not successful, even if it’s needful, church leaders give up on the enterprise and chase after another unproven theory of organization or success. People are left behind, the work of the kingdom remains undone, and worse, Jesus is constantly crucified on the cross of the “bottom line.”

I want to be careful in condemning the candidate and the answer, “Success.”

Those who condemn the answer must think about the first chapter of Isaiah. Where do we fit into that list of failures? Listen to Isaiah’s words as God warns, “When you stretch out your hands, I will hide my eyes from you; even though you make many prayers, I will not listen; your hands are full of blood.”[1]

Oh, God help me! I lift up my hands in prayer as I stand at the altar. Are the eyes of God hidden? O please, Lord God, say it isn’t true. Nevertheless, there is danger in smugness. There is a risk of condemnation.

In our Eucharistic prayers, we make a reference to the sacrifice we make in prayers and 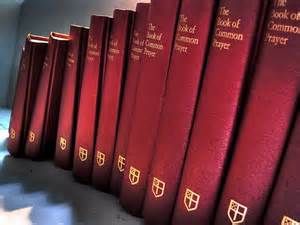 thanksgivings. For example in the traditional Eucharistic prayer, the celebrant says at one point, “And we earnestly desire thy fatherly goodness mercifully to accept this our sacrifice of praise and thanksgiving…”[2] In the contemporary version the celebrant says, “We celebrate the memorial of our redemption, O Father, in this sacrifice of praise and thanksgiving. Recalling his death, resurrection, and ascension, we offer you these gifts.”[3]

The question is, “Who is making these sacrifices of praise and thanksgiving?” Because the Great Thanksgiving, as the prayers offered in the Holy Eucharist are named, is in The Book of Common Prayer, the hope is that all present, and these words are a part of the represent everyone’s sacrifice.

In Isaiah’s warnings, he speaks of festivals, rituals, burnt offerings, and blood offerings. Of course, no longer do we do such things as that. We offer back to God the gift given us by God—the yield of the wine grape and wheat shock. We offer ourselves as living sacrifices in the hope that by being in communion with God through Jesus Christ—taking into ourselves his body and blood—we are ready to proclaim the kingdom of God by both our lives and the words that come out of our mouths. This readiness requires us to be good soldiers, not seeking awards and congratulations for our sacrifices of success. This preparation compels us to meet the demands of the old hymn, “Stand up! Stand up for Jesus ye soldiers of the Cross.” Stand up to proclaim the love of God in the face of terror, in the battle against greed, and in the struggle for human dignity. When we meet those criteria of readiness, our hands will not be covered in blood in the eyes of God; we have made a meaningful sacrifice.