You are here: Home » HUMBLE WISDOM 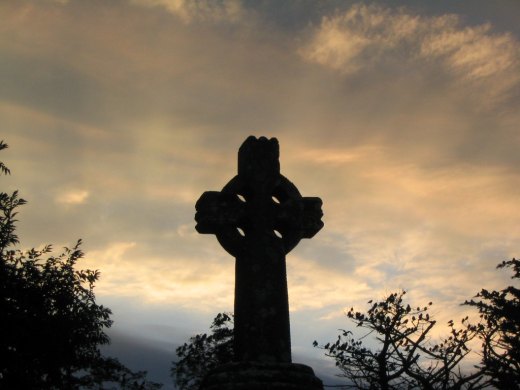 While working on one of my efforts to increase membership and attendance in the church, I came across and read a book called Celtic Way of Evangelism[1] by George G. Hunter III. The book was enlightening. I am reminded of that book as I read the Gospel selection about being the salt of the earth, the light of the world.[2]

The author’s point is that the Celtic Church found footing and grew in Ireland because of the way it sought converts. The Celtic Christianity, which flourished long before Rome sent its missionaries to the British Isles, converted the pagan Celts of the British Isles by humbly being present rather than preaching doom and gloom.

It is believed that in the third century Christian missionaries brought the Gospel to the distant British Isles. Likely these missionaries were the Desert Fathers from the Sinai Peninsula. The well-known Anglican preacher, Herbert O’Driscoll,[3]postulates that these ancient missionaries traveled all the way through Celtic Gaul (France) into Britain and then to Ireland. Because of their monastic tradition to welcome the stranger in the desert of Egypt, these Desert Fathers knew how to invite people into their circle of friendship and sharing. This early style of evangelism became the norm for Celtic Christians.

Among the Celts, the strategy was to first build a sense of community. No effort was made initially to convert people. Instead, the Celtic Christians preached by the example of their lives and the warmth of the community. It is an evangelical style worth emulating. In other words, the Desert Fathers took seriously Jesus’ instruction to be the “Salt of the Earth.”

When the Apostle Paul writes to the Church in Corinth, “When I came to you, brothers and sisters, I did not come proclaiming the mystery of God to you in lofty words or wisdom,”[4] he was describing the style of evangelism the Desert Fathers later employed in their work to bring the Good News of Jesus to the world. Paul entered into European communities as a tent maker. He talked of the Crucified Christ but apparently did not argue with philosophers of the time or places.

Paul suggested that the wisdom of the age while outwardly noble and maybe even appealing, lacked the compassion and did not emulate the sacrifice of Jesus on the cross.

One of the philosophical systems that had a wide appeal was Cynicism,[5] a philosophy that taught it was up to the individual to find a way to live in harmony with nature and to eschew owning things, exercising power, and avoiding intimacy. This philosophy grew out of the teachings of Socrates and was widely discussed, if not followed in ancient Greece.

Cynicism spread with the rise of Imperial Rome in the first century, and Cynics could be found begging and preaching throughout the cities of the Empire. It finally disappeared in the late 5th century, although some have claimed that early Christianity adopted many of its ascetic and rhetorical ideas.[6] Nevertheless, this was the wisdom of the age Paul said he did not bring to the church in Corinth. He brought a new philosophy; a philosophy of wisdom, of community, and love (he would have called it agape—unconditional love). The wisdom of the age turned people into beggars and the word to describe the philosophy—Cynic—becomes a pejorative, a disposition of disbelief in the sincerity or goodness of human motives and actions.[7]

Paul brings a new wisdom, a simple wisdom, of the message of Christ Crucified. The value

of the knowledge of Jesus’ sacrifice on the cross can only come through the enlightenment of the Holy Spirit of God. Philosophers can debate, preachers can offer intelligent homilies, but the only way a person can come to Jesus and accept him as savior is through the enlightenment of the Holy Spirit. This is the simple wisdom Paul teaches. This is the simple gift of the Desert Fathers who brought the message of Christ Crucified to the Celts over a thousand years ago.

This is our heritage and Anglican Christians. We may reflect the Latin Church in our outward appearances—all western Christianity does—but we have beneath all of that the simple gift of Celtic Evangelism. Our failure in the modern era has been to either to fail to recognize that heritage or if we know of it, set the example aside.

American Christians are often guilty of setting up barriers to knowing Christ Crucified and allowing the Holy Spirit to act. For example, current statistics[8] show that more and more people are disavowing any religious affiliation. Statistics show that people often see the Church as condemning and non-affirming.[9]

How do we overcome the trend toward an anti-religious culture? What can Christians do to preach the truth of Christ Crucified?

The Desert Fathers first initiative was to live in the imitation of Christ. Of course, they gave up their wealth, power, and worldly behaviors to live in the harsh deserts of Egypt but they did not become Cynics. Instead, they built a new community founded in unconditional love and took that ideal to the world—apart from the isolation of a harsh Sinai Desert. Paul provided the model as a missionary who did not demand followership for himself but only wanted the world to know the value of living a life centered on the crucified Lord Jesus.

The model is obvious to us. Does it mean we should give up on our liturgies, our Bible studies, and our Anglican theology? I do not think we need to compromise any of that. However, our first priority must always be: address the world in simple terms, emphatically model Christ Crucified, and pray that the Holy Spirit of God engulfs our broken world. In our preaching we become transparent—Christ is not only seen in us but through us. In other words, we become the light of the world in Jesus Name.

[3] The Rev. Dr. Herbert O’Driscoll, am International Missioner and Teacher, living in Victoria, British Columbia, Canada. O’Driscoll is recognized as the best known and one of the most highly regarded preachers in the Anglican Church of Canada. Dr. O’Driscoll is a former urban Cathedral Dean in Vancouver, B.C., and former Warden of the College of Preachers, Washington National Cathedral. He is the celebrated author of 30 books, including A Doorway in Time, a reflection of his own Celtic spirituality, and Emmanuel, written while in the Holy Land. In great demand as a speaker and conference leader, O’Driscoll is at once a brilliant scholar and mesmerizing Irish storyteller.

[5] Cynicism (Greek: κυνισμός) is a school of ancient Greek philosophy as practiced by the Cynics (Greek: Κυνικοί, Latin: Cynici). For the Cynics, the purpose of life was to live in virtue, in agreement with nature. As reasoning creatures, people could gain happiness by rigorous training and by living in a way which was natural for humans, rejecting all conventional desires for wealth, power, sex, and fame. Instead, they were to lead a simple life free from all possessions. See http://en.wikipedia.org/wiki/Cynicism_(philosophy).