You are here: Home » ENDING THE CLASS STRUGGLE

Many years ago now, I had to be in the District of Columbia—Washington—for a week or so. When Sunday came, I decided I would try a suburban church and selected to go to the Episcopal Church in Potomac, Maryland.

I should have known that this is a posh suburb of elites working in government, lobbyists, and chief executives. The church building is large and I wandered around hoping to find a human being to talk to. I did find a photograph of an old friend, deceased, who once served as a curate in the parish. No living soul spoke to me all during my wanderings. Some passed by, but did not nod to say “hello.” Most walked by me and stared at me trying to place me—“do I know this man or not?”

The problem, I got to the church too early. The Rector was busy somewhere, others were preparing for the blessing of the animals, and others were chatting in tight circles of friends. Finally, the worship began and it was satisfactory with a good choir, good preaching, and a good ambiance. I felt uplifted and decided to go to the parish hall to observe the animal blessings—not many animals but many stuffed bears. Someone dressed as St. Francis of Assisi did the blessings. The children with the pets and Teddy Bears were wonderful, it was a good experience. Nevertheless, I had been in the church for nearly three hours and no one greeted me. Finally, a member of the parish came up to me to ask who I was and why I was there. It was more like an interrogation than a greeting.

This is the sort of thing the Apostle Paul concerned himself about when writing to the Church in Corinth. Paul did not like the news he was getting about the Corinthian congregation. All sorts of things were going awry; it was so bad he had to write to them twice to get things in order. Some scholars believe that he had written a third letter that was strongly rebuking the Corinthian’s behavior. The letter was so rebuking that he sent Timothy to retrieve it before the letter reached Corinth. 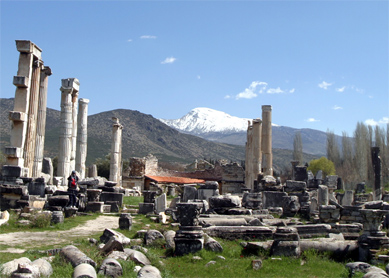 Remains of a Greek City – Corinth in Southern Greece

The problem among several for Paul was that the congregation tended to divide by social class. Those of the lower social structure did not participate in the Lord’s Day supper with the same dignity as the upper class. In Corinth, one’s place in the social class structure was rigorously kept. Not uncommon was the distribution of food to the lower class came only after the upper class had eaten. The leftovers were handed out as far as they could go. If one didn’t get to the communal dinner on time, there was no recourse but to go hungry.

The Apostle’s point of view was that no one was subject to class preferences. All are equal in the sight of God, all are equal as brothers and sisters in Christ. Therefore, in order to be clear about this teaching, Paul tells the Corinthians to eat at home before gathering to celebrate at the Lord’s table. He spells out what is to be done, how it is to be done, and what is to be said when celebrating the life, death, resurrection, and ascension of Jesus.

Clearly, the celebrant is to hold the bread and say words of Jesus, “This is my body that is for you. Do this in remembrance of me.” In the same way, he took the cup also, after supper, saying, “This cup is the new covenant in my blood. Do this, as often as you drink it, in remembrance of me.” The major issue was that the eating and drinking of the Lord’s body and blood was to be a solemn ceremony, not a feast of gluttony, and certainly not a place to carry on social discrimination by class.[1]

Paul understands the words of Jesus when he said, “I give you a new commandment, that you love one another. Just as I have loved you, you also should love one another. By this everyone will know that you are my disciples if you have a love for one another.”[2] Love is the primary characteristic of a follower of Jesus. Paul wants it understood by the congregation in Corinth that the love Jesus commanded his followers to show to one another was not conditional. Class status had no place in the presence of Christ. No one was or is to be shunted aside because one does not meet the artificial standards of the social class.

When Christianity became the religion of the Roman Empire, the teaching of Christ and the Apostle Paul seemed to have been set aside. While everyone came to the Mass, there were divisions based on class. There were divisions on where to sit, who came to Communion first, and who could determine the course of the Church’s mission.

Thus, the words of Jesus, “This is my body…” and, “This is my blood…” were heard differently by class structure. The upper classes were more forgiven than the lower classes, who had to struggle for life as well as forgiveness.

Therefore, it is the church itself that must seek forgiveness for perpetuating this class difference unjustified by Scripture or by the reality of human existence. At the Lord’s Table, there is no class structure, only people coming to God seeking forgiveness and seeking to be in and live perpetually in the presence of God.

When we take in the body and blood of Christ we are in the presence of Jesus. He dwells in us as we dwell in him. As Paul wrote so long ago, there is no place for this manufactured difference in the people of God. Further, as Paul writes, the greatest of all manifestations of living in Christ is love.

In his willingness to stoop to wash the feet of his disciples, Jesus makes it clearly understandable what the nature of love is humility. To humbly reach down and wash the feet of his followers demonstrated to them and to us what love looks like: It is to want for another person the same sense of well-being and security you want for yourself.